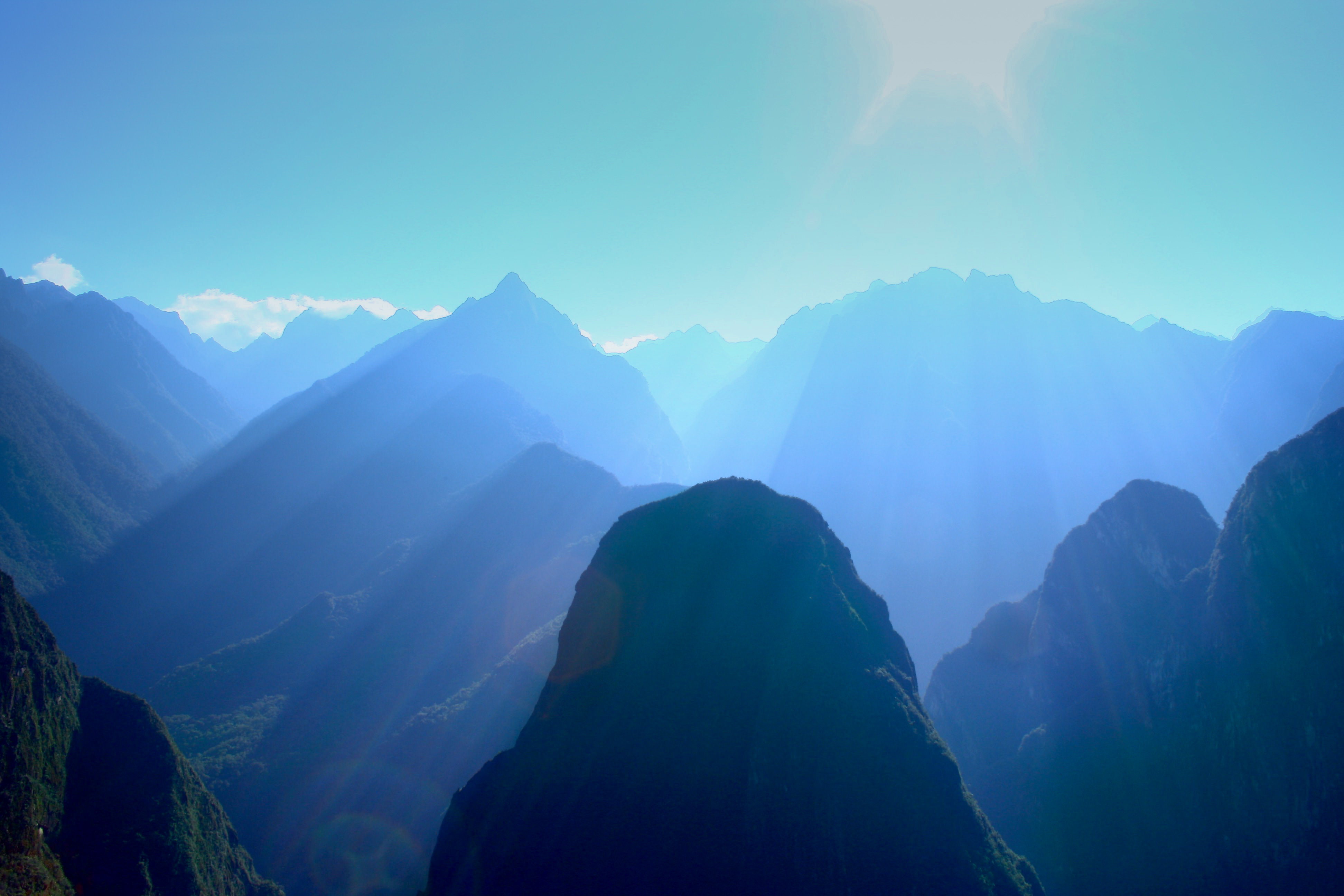 Magic of the Mountains

“He stood on the hill surveying the encircling mountaintops. With his subtle vision, he could see connecting lines of light drawn between the craggy peaks, some brighter and with more substance, some tenuous and faint, all a beautiful pulsing grid pattern. Over them all, a beautiful golden bubble seemed to hold them, caress them, care for them, vibrate above them. He could see lines of light peeling off the mountains’ heads, exiting the bubble, heading to far away unseen places.

Suddenly a condor alighted, and he thought he saw sparks flowing from the branch as its body pushed away. With the great bird as his focus, his hand swept a powerful plant at his side, and Brugmansia arborea lifted its strong fog-clearing lemon vanilla scent to his old sleepy nostrils. His footing slipped slightly. The mountains spun around him. He had become heady with all the strength and power of this place. He was in a sacred mountain range filled with life, and the life he felt was more than nature and animal. There were giant beings all about him. And as he slowly regained footing and began his walking descent, he could feel some of these beings flanking his path, hovering near, ever watchful, ever accompanying him, and perhaps, ever expectant….”

The rich magic of place is a wonder to behold. This great blue marble holds a kaleidoscope of nature spirits and more. There is deep wealth of the richest kind awaiting those who investigate this path. This telling here is but a tiny allotment of what can be found if this becomes part of one’s practice to connect.

What is often not realized by many seeking connection to nature and her spirits is that the mountains of the world are spirits themselves. They each hold a distinct personality, and they each have gifts to offer us humans who seek to know them and understand them. They each have desires in the health and events of the planet. They each have obligations to others. Like many ancient gods, they each also have more earthly forms and higher forms, each radiating different aspects of total personality. Getting to know them, especially those surrounding your place of living, can add greatly to your spiritual practices.

It’s often not realized that the land spirits around us, like the mountain spirits mentioned above, can have connections to other land spirits in faraway places. In fact, these mountain spirits know of each other, and many are connected as family, even if separated by continents! For example, a mountain spirit in South America is known by some to call a mountain spirit in Southern California as immediate offspring. In regular evocations, their lower forms have appeared materialized very physically to devout practitioners as bird-forms with human heads. Their higher forms have appeared more human in form, glowing and radiating and floating, divinely beautiful.

These workings lead to further understanding that the great mountain spirits of the world can work together to help effect change for a person or group. There is strategy to be had here for getting things done, especially for complex issues that perhaps even cross borders. The world is deeply connected, and sometimes a single local spirit can be of help, and sometimes, international phone calls can be made.

And when one comes to know local spirits like those of the mountains, and makes regular offerings to them, they are now your ally.

Spend some time getting to know the mountain peaks and ranges nearest you. You may be in an area where not many are doing so, and these spirits may be surprised at your attention, and then eager for the contact. If you are in a flat geography, just extend your subtle senses outward to the nearest surrounding peaks. Feel their aliveness, make regular offerings to them, ask about their likes and dislikes, and sense what level you are contacting, chthonic or more elevated. After a while or season of including these spirits of place in your contemplation and offering exercises, and after one of your regular offerings to them, begin to sense the lines of connection reaching outward from their peaks. To where do these lines lead on the planet? Which feel stronger? Which are most active? Which may feel with tension? Which feel changing, different than prior? Read the historical lore of the mountains you are studying, find the legends and myths. Some cultures will make this easy, like the Hawaiian lore that is built on mountain and sea, myths galore for the devouring. Some however will be tougher, legends dead and buried. Then you can rely on intuition and other divination techniques.

When traveling, pay attention to local lore, and if the locals revere a particular mountain peak, know that because of the constant focus from humans, that mountain could be very powerful. Plan to spend some time getting to know it, feel it, scale it if you can. In particular, plan ahead for this time in your travels. Get to know geography ahead of time, as much as you can, and read the history of the area, so that you do not miss a golden opportunity to feel completely another area’s powerful spirit.

Burial Ritual
If possible, see if a burial ritual can be done (though you are on your own liability, just be smart and have partners with you!). This may be impossible in many areas. But if it can be done, it is a powerful initiation in its own right, even without the possibility of being on land rich with presence, a sacred mountain, held and swallowed by the great spirit. For a burial ritual: Connect with at least two others who are willing to do this with you. Two stand guard and watch over the one who’s turn it is for burial. With proper permit or allowance, dig a hole longer than the tallest, and slightly deeper than the largest person to allow a few inches of dirt on top of them. Plan a “ramp” at one end for the head to be just at or raising above ground level, as the head is *not* buried. Know that the dirt will act somewhat like being in water, and it will pull heat away from the body. Be smart about this, if you are nude you will need to work on the element of fire to warm you, or any other technique you may know. On the other hand, greater earth-to-skin contact can heighten the affect of the ritual.

Recline in the hole, and have your partners cover you and stand watch. Close your eyes and journey into the mountain, feel her arms around you, feel the womb of her, all that she is, all that she can give to you and convey to you. If the mountain feels male, feel that merging with the strength of maleness, of what power this mountain has to offer to direct change, its linear power to transform, its focus to become, its knowledge of force. Again feel for connections to other mountains near. You may easily enter trance state or you may have a more challenging time; all have different reactions to this ritual. Stay as long as you are inclined, from perhaps 15 minutes to hours. Then warm up with fire and hot beverage and blankets, and then switch turns, or switch turns over a day or two of completing this ritual. This ritual is most powerful at night, and if you can find a power spot on the mountain, the effect may be life changing.

I have done this ritual. I was slightly curious if I should feel fear at doing it. Laying down in the hole was surreal, more than odd, something one never forgets. I count it as one of the most powerful rituals of my life. In it I faced both life and death, being consumed by the planet and land and being reborn of it, feeling a vastly increased connection to the land, remembering we are of it and return to it, feeling the powerful spirit rock me and hold me. I cried and laughed, and cried and laughed, and then laughed uncontrollably for a long while.

And then the rain started. Have you ever thought of being buried up to your chin with rain falling on your face? It is complete and total surrender! There is no doing anything but being awashed in the elements, earth below, air and water above, while I meditated on fire for warmth. It was a complete rebirthing to the core. I was alternating between shivering and holding on for just 5 more minutes, and feeling awash in warmth as my fire meditations would again kick in, then feeling the warmth of the spirits holding me flood through me with a potent rush, then feel the earthly elements steal away my warmth again in a vicious cycle. And again I’d surrender, and laugh again at the rain which was coming harder. Minutes later tickling hit my cheek beyond the reach of the raindrops, — aaack bugs! I was sure bugs were crawling on my cheek, and so I’d surrender that and invite the spirit of the bugs of the mountain to teach me what they had. And then back to the mountain, and her great arms and warmth and infinite love….

In the end I was exhausted and exhilarated and shocked and amazed. And I’d done something I never thought I’d do. And beyond the connection to the spirits holding me that rainy night, it was a victory too. If you find yourself at a place in life that allows this ritual, or even if you can seek it out, it is unforgettable. It is a merging with the mountain, becoming her from the inside out.

Visiting the space the next day brought a pulsing, a vibration, an aliveness that far exceeded the days prior. The energy lines of the mountain carried me far in meditations and journeys. And because of the merging, their grid shined more brightly, a powerful vision and journey.

The Big Picture
The mountains are connected, richly so to those mountains nearest, and perhaps just a strong and in come cases more so to mountain peaks in far away lands. Feel the connection of the planet. Feel the purpose of the mountains of the planet on all her levels. Feel the bubbles that contain the areas nearest you, and then the bigger bubbles that join regions, the even larger bubbles that contain nations, all inside the great bubble of the planet. And within and connecting these bubbles are lines of light, all ferrying information to each other at infinite speed. This deep and billions-years-old communication grid awaits your tapping. Let us know what happens.

This blog is part of a blog hop. Find the other posts here: